When you buy through links on our site, we may earn an affiliate commission.

Potting soil is the most important ingredient to grow awesome plants in containers. But after a growing season, a lot of nutrients may get depleted as the plants absorb those. You need to improve the potting soil so you can use it again.

I’ve written the 8 steps that will help you rejuvenate your old potting soil so you save some money and recycle it for your next growing season.

1. Remove unwanted materials from the soil

The first thing you want to do is remove dead plant material from the old potting soil. You can pull out the old roots, stems, sticks, and other unwanted debris.

There may also be weeds growing in the potting soil that you need to pull out. Make sure you pull them out along with their roots or they may start growing again.

You can use your hands to pull these materials out. Using a trowel is easier and faster than digging for the old roots, stems, and weeds.

Now that you’ve removed the unwanted things from the soil let’s fix the next problem. Since the old potting soil has been used for a while, it may have compacted due to the pressure.

This means less space between the soil particles, which does not allow air and moisture to flow through with ease.

So you need to aerate the old potting soil and improve its texture. The easiest way to do this is to use a trowel or a fork to dig into the potting soil. If you have a large container, you could use a rake or shovel for this.

If you have a wheelbarrow, you can overturn or shift the potting soil to it and do this process. It makes this easier as you get a lot more space to work with the potting soil.

Poke into the soil and overturn it so it starts to regain its texture. Keep doing this till all of the potting soil has been mixed up to improve the texture.

I asked some of my fellow gardeners if they improve and reuse potting soil from the previous season. Most of them said they reused the soil after amendments as shown below.

3. Remove pests and diseases from the potting soil

It may happen that your plant in the container suffered from pests or diseases during the growing season. Or you just want to be safe before reusing the soil.

You should not use this infected potting soil without sterilizing it to kill the remaining pests and diseases in it.

The easiest way to do this is to put the potting soil in a black garbage bag and leave it under full sunlight for a couple of weeks. The heat will kill all the pests and diseases in the soil.

A faster method would be to place the potting soil on a baking tray and put it in the oven set at 120 degrees for an hour. This will kill the pests and diseases in the soil.

The drawback of doing this is that the heat will also kill the beneficial organisms and insects present in the soil.

Once the potting soil has cooled, you can add it back to the container. Make sure the container is also sterilized before doing this.

You can sterilize the container by placing it in a larger container or tub filled with 1 part bleach and 9 parts water. Let the container sit in this solution for an hour.

Then rinse the container with clean water and let it dry under the sun. Once it’s dry, you can add the sterilized potting soil to it.

You may keep adding organic fertilizer to the potting soil when growing plants. Over time, the salts keep building up in the soil.

If you use hard tap water, there will also be a buildup of such salts in the potting soil.

Use a watering can or hose to soak the potting soil with water until it drains out from the drainage holes at the bottom.

Repeat the watering process 3-4 times so you get all of the excess salts out of the potting soil.

This will help you save some money as you need to buy less potting soil. You can also reuse the old potting soil that you removed in some other containers if you want.

You can mix in the old and new potting soil with the help of a trowel. You may need a shovel if the container is large with a lot of potting soil.

You could even dump the old potting soil in a wheelbarrow and mix it with the fresh potting soil. This would be a bit easier to do without spilling the soil out of the container.

It’s best to add a little of the fresh potting soil, spray water and mix it up well. Keep repeating the process till all of the old and new potting soil has been mixed.

Adding compost is the best way to increase organic matter, nutrients, and beneficial organisms in your old potting soil.

The compost will also help improve the texture of the old potting soil. It will help restore some of the soil’s moisture retention and aeration properties due to the organic matter.

I suggest adding 10-25% compost to the old potting soil. You can mix it in the container itself.

Or you can place the old potting soil in a wheelbarrow, add in the compost, and mix it in well. You could use a trowel for a small batch of potting soil or a shovel if the quantity is large.

7. Increase the nutrients in the soil

The compost will provide a boost of nutrients to the potting soil. But I also recommend adding some slow-release organic fertilizer to it for plants that are heavy feeders.

The quantity you add will depend on the amount of potting soil and the manufacturer’s recommendations. So check their instructions before adding to the soil.

8. Improve the texture of the soil

You can take this optional step if you find that the potting soil still needs some improvement even after mixing fresh potting soil and compost.

If you find that the potting soil is not holding sufficient water and draining it out fast, the soil may have turned hydrophobic.

The best way to make it hydrophilic or get its moisture retention back is to soak it in water for an hour. Let the soil absorb the moisture slowly and get its texture back.

If you find that the potting soil is retaining more moisture than it needs to you can add materials that will help it drain water faster.

Some materials that can help you with this are coarse sand and perlite that have texture to drain the water out. I would suggest adding 10-20% of such material to the potting soil.

Make sure to use coarse sand and not the fine one because it will not drain the water well.

Here are some of my favorite container gardening tools

Thank you for reading this post. I hope it helps you with your gardening needs. I’ve listed some tools below that can help you with container gardening. These are affiliate links so I’ll earn a commission if you use them.

Gardening Gloves – I find the Pine Tree Tools Bamboo Gardening Gloves really good for both men and women. It’s made from bamboo so helps absorb perspiration. They are also comfortable and fit very well.

Containers – You know picking the right container is crucial for your container gardening. I’ve written a detailed post on the best containers you can choose from. If you’re happy with a plastic container, you can check out the Bloem Saturn Planter.

Watering Can – This is a must-have tool when you’re growing plants in pots or grow bags. It helps to water the potting soil without splashing on the foliage. The Kensington Watering Can is stylish, strong, and can provide precision when watering potted plants.

Trowel – Garden Guru Trowel is my favorite because it’s durable and comfortable to use. My gardening friends really love having a trowel because they use it for digging soil, mixing fertilizer, moving seeds, leveling out the soil, mixing compost or mulch, and also dividing tubers

Bypass Pruner – I really like the Corona Bypass Pruner because it’s durable and gives a clean cut that helps plants recover faster. If you’re looking for something cheap, get the Fiskars Bypass Pruner that is really good as well.

To see an extensive list of the best container gardening tools gardeners recommend, check out this resource that I made for you. 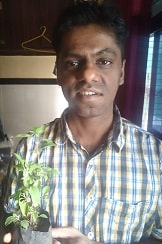 Get My Book On Amazon